Europe leads the global drive towards Universal Health Coverage. What are the opportunities for the future?

Vytenis Povilas Andriukaitis, Special Envoy of the WHO for UHC for the European Region 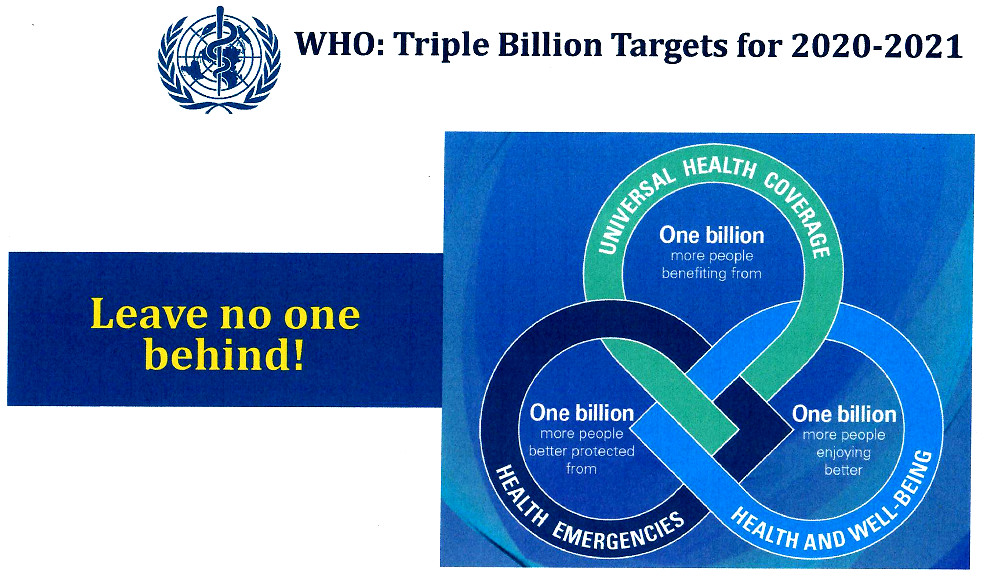 In September of 2020 countries of WHO European region approved a policy “The European Program of Work, 2020–2025 – “United Action for Better Health” (EPW) that sets priorities of European health policy for the coming five years.

The first Core Priority of this program is “Moving towards universal health coverage (UHC)”. International background of the priority is an obligation of European countries to implement UNDP Sustainable Development Goals (SDGs). SDG 3 commits signatories to “ensure healthy lives and promote well-being for all at all ages”. SDG 3.8 commits signatories to “achieve universal health coverage, including financial risk protection, access to quality essential healthcare services and access to safe, effective, quality and affordable essential medicines and vaccines for all”.

The fact that this first Priority under the leadership of doctor Hans Kluge Regional Director for Europe of the World Health Organization was developed amidst the COVID-19 crisis makes the objective very ambitious. Since the beginning of pandemic, we have seen more than 900 thousand deaths in European region. Those figures convince us that UHC is like never important.

The initial response of Europeans to pandemic was slow and highly fragmented, with Member States often pursuing their own national objectives to the detriment of Europe as a whole. At a certain point tensions in the EU were strong enough to describe the initial lack of solidarity in response to pandemic rightfully as a mortal danger to the EU. By voting for “United Action for Better Health”, Europeans showed commitment to overcome existing tensions and to work towards SDGs and UHC.

For the genesis of UHC we may look to the Constitution of WHO. A principle “The health of all peoples is fundamental to the attainment of peace and security and is dependent upon the fullest cooperation of individuals and States” is enshrined in the Constitution.

Most of European countries endorsed the above quoted principle in their national policies at least partially. Since 1970 public financing of the health sector has prevails in Europe regardless of political rivalries, ups and down.

You may say that a vision of UHC more or less unites European region? However, there are huge gaps in coverage and marginalization of particularly vulnerable groups of the EU societies, like disadvantaged groups in society, patients with rare diseases, refugees? We see big differences in the life expectancy between countries in the hole European region.

The progress of UHC has national and international dimensions.

Firstly, the UHC national dimension, as it is stated in Global compact for progress towards UHC, “progressive realization of the right to health through UHC is primarily a national responsibility”. The COVID -19 pandemic and its looming economic fall-out are putting health and social care systems under heavy stress. And national dimension of UHC is under big pressure also.

People are fearful and trust in governments is eroding. Frontline health care workers not been supported adequately during pandemic, which adversely affects service quality. People want greater government spending on health but tend to overlook the need to invest in preparedness and public health services. Many COVID -19 responses are still gender blind.

Inequalities in health according to regions, social groups, gender are striking in all countries and are widening due to COVID-19. The poor and vulnerable are being left behind.

Healthcare workforce shortages also makes a lot of problems in many countries. In many regions within and between countries we can see lack of nurses and doctors, especially in areas of primary health care. Such medical deserts undermine people trust in our promise to leave no one behind and to move towards our triple targets.

Europe needs more cooperation for health and more UHC for all Europeans:

The EU is doing a lot for health on international level but may do even more by helping all countries of WHO European region to manage COVID-19 pandemic, by opening access to public goods developed by European bodies (ECDC, EMA) to neighbors to the east and the south of the EU.

Reduction of cross border spread of communicable diseases, progress of wellbeing and social stability in neighboring countries, growth of soft power of the EU are tangible returns on EU investment into UHC of the EU neighbors. But it is not enough.  For what more it is needed see slides below. 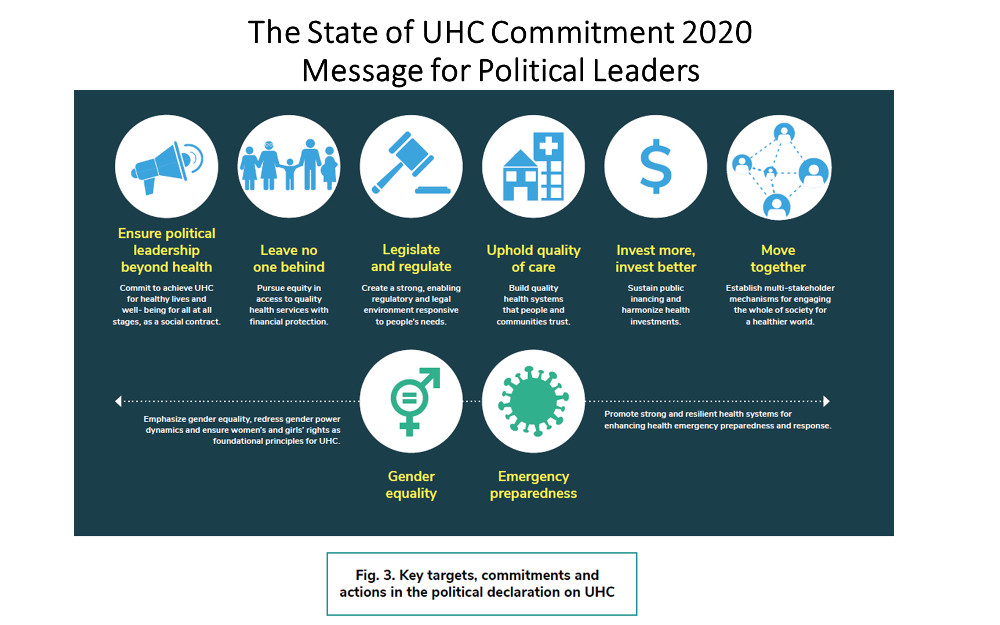 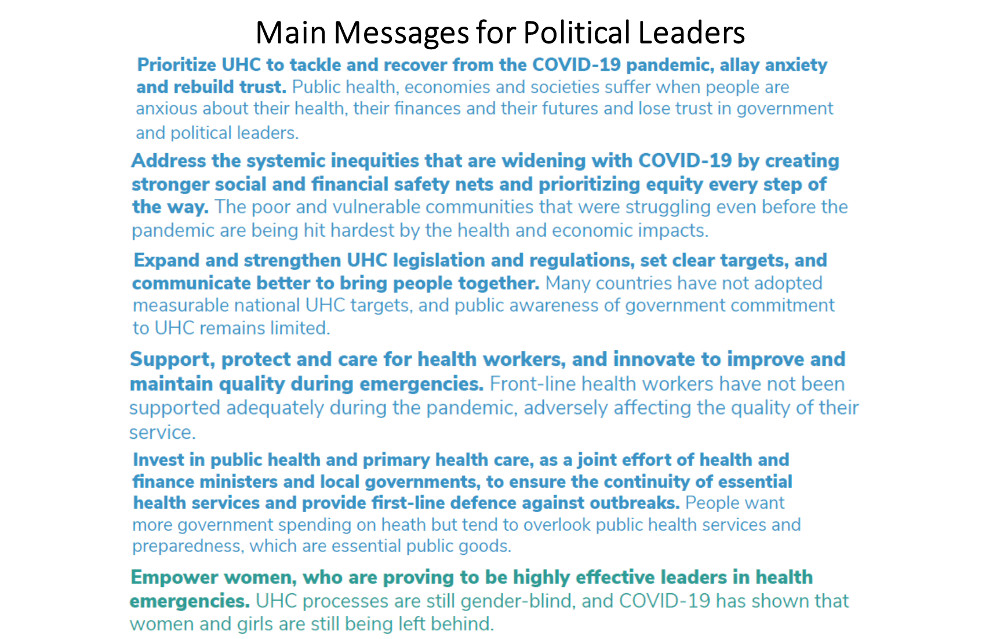 One of political preconditions of the progress towards more solidarity, more cooperation for UHC in Europe  and of European leadership in a global health policy is self-determination of a role the EU wants to play in Health policy.

Because Portugal now is the Presidency Country of the EU and is the host of this Global Health Conference, let us take a look to the Lisbon Treaty. In the Preamble of this Treaty we read:

“Drawing inspiration from the cultural, religious and humanist inheritance of Europe, from which have developed the universal values of the inviolable and inalienable rights of the human person, freedom, democracy, equality and the rule of law.”. Under Lisbon treaty the EU is obliged to facilitate the free movement of persons, while ensuring the safety and security of their people. The Union’s aim is to promote peace, its values and the well-being of its peoples. The Union shall establish an internal market.

Development of the internal market and economic and monetary union is at the core of the European integration that started from the Coal and Steal Community and continuously shaped the design of all European Treaties.

Health is a value in itself and a human right but for years it was a small topic of European Union politics. COVID-19 has catapulted health to the top of political agenda. The European Health Union became buzzword of European politics in 2020. What are chances that EHU would be not the complimentary union to the internal market, but it will reshape European health policy internally and globally?

Following the logic of the TEU, the TFEU is prioritizing the articles devoted to the development of internal market against the articles dealing with other activities of the EU. Development of health is considered to be important to the Union as much at it serves better functioning of the internal market. The human health is treated almost exclusively up to the Member States even in areas as, for example, management of rare diseases and cancer, where most of the MS are not able to assure proper services to patients.

Legal limits enshrined in the treaty do not allow EU to confront COVID-19 in very effective and strong manner.  A minimalistic involvement of the EU into European health policy hampers European role on the international scale. How can the EU be active in health policy globally with very limited responsibilities inside the block? Limits of international outreach of the EU are clearly indicated by the fact that the Union is not even a member of the WHO.

Europeans need a more “healthier” face of Article 3 of the Lisbon Treaty. Let us amend part 3 of Article 3, which starts with “The Union shall establish an internal market” by one sentence. “It shall promote universal health coverage by establishing a health union”.

The explicit stance of the EU for UHC is needed not just because health per se. Currently EU citizens’ expectations on deliverables of the EU are exciding those related to current two main pillars like  single market or  economic and monetary union. Europeans are looking for the new stage of development of the EU. The pledge to work for SDGs and Green deal, current discussion on the EHU are examples of shifting political priorities. Based on humanist inheritance of Europe, on the values of respect for human dignity the an additional “humanistic” pillar is demanded but has no definition yet. Let us start the discussion how to name this new pillar, having in mind that the polishing of the term will take time. Why not to include health as “a state of complete physical, mental and social well-being” into definition of the new pillar, thus, to consider a European Health Union as turning point from the block mainly concerned about economics to the union promoting the values sheared by founding fathers   “the values of tolerance, respect, equality, solidarity and peace”?

A notion of COVID-19 vaccine as a global public good, the notion of public goods such as health and environment is a sign that values of solidarity are capturing hearts and minds of people all over the world.

Let us be inspired by the words of Robert Shuman: World health “cannot be safeguarded without making of creative efforts proportionate to the dangers which threaten it”. Let us work for “United Action for Better Health, for UHC in our Countries, the EU, European WHO region, globally.

Portugal being a birthplace of great geographical discoveries and a place, where Lisbon treaty was signed. Portugal is well suited to champion the global health policy with the UHC at its core.